How do young people feel about the way in which their digital data is stored? And how does Covid-19 affect our relationship with data and ethics?

Data and Ethics in the age of Covid-19

The Covid era has brought new engagement with data. We have all become aware of hospital admissions, rates of spread and the deaths brought about by Covid-19. This data represents the impact of the virus, but we also know that some of the biggest companies in the world are data companies. That points to the opportunity for data to move from describing what is happening, to helping us to shape our response to Covid-19, but also to the other major challenges that face us.

The RSE’s Post-Covid Commission has been committed to engaging broadly on issues of data, data ownership and the ways in which we can use data to create better social and economic futures for us all. One of the ways in which the Data, Evidence and Science working group  has done that was to host a roundtable with young people discussing data and ethics. Collaborating with YoungScot, we  brought together a dynamic panel of young people, experts and me.

One of the most interesting aspects of the discussion was that the young people involved were much happier sharing their information with public bodies like the NHS or their schools than with social media companies. This was because of the perception that public bodies are likely to use data for good, whereas social media companies are most likely to use the data “to sell us things” as one contributor commented. There was, for example, a worry about the use of Facebook and other apps for communicating with  course groups at University. This forces young people into using apps and platforms they may not be comfortable with.

You can hear more on this from Wiktoria Orlicka MSYP, one of the young people attending the roundtable below.

Taking control of your data

We also discussed ways that young people can control their own data, using the 5 Rights Foundation’s rules for data for children and young people. By taking a human rights based approach these aim to protect young people online by creating common standards. As Scotland has adopted the UN Convention on the Rights of the Child, this now extends to digital rights.

One of the key points coming out of the discussion was the issue of data literacy, transparency, and awareness. Questions of privacy, and the nuance of how we can curate our own data for ‘good’ depend on people being able to understand how data is collected and what their data is used for. All too often debates around data assume that data collection is something ‘done to’ people.

Professor Shannon Vallor made the point that people taking a privacy-led approach to data tend to ‘shield’ their data from organisations. This forecloses the opportunity to use those data for social, environmental and economic good. It’s clear that if we had more trust in the organisations that collect data, we would have been able to quickly develop an app that used mobile phones for test and trace in a way that the approach we used failed to achieve.

This points to the need for new institutions to govern data in a trusted way. I often point to the example of 19th-century building societies and trustee banks, which transformed people’s relationship to money. Instead of borrowing money from loan sharks, or keeping their cash under the mattress, these providential institutions allowed people to save up, and very often to buy their own homes. They introduced social good into a financial system that lacked any trust. So we need the governance structures to allow us to trust what our data will be used for – and perhaps more importantly to allow it to be used for social good.

Professor Niamh Nic Daéid pointed out that we have developed systems that need to have ethics retrofitted to them. This makes it more difficult, and points to the need for an approach to ethics that is a practice, rather than a code. This means that each decision should be made by someone who is aware of the ethical impact of data collection. Just as citizens need to be aware of how data is collected and used, so we need to have developers who are able to consider the impact of their decisions, and ways to make them accountable for those choices.

Interestingly, none of the participants had ever engaged in a discussion about what they would like their data to be used for.

There is a huge opportunity for a citizen-led approach that identifies what data can be used for and creates opportunities for citizens to share their data accordingly. A co-designed approach to what data could be used for might help to develop better data literacy, improved governance and transform data from being a way to exploit people to something that helps to improve the world.

The strongest message was that citizens need to be at the core of the process of creating data systems and identifying uses for data. At a time when tracking a pandemic is vital, we can see clearly what benefits are there for society.

Data is created by us all. It should be used for our benefit.

Video recorded by Wiktoria Orlicka MSYP, a Member and Trustee of the Scottish Youth Parliament.

The illustrations featured were produced by Live Illustration, a virtual graphic recording agency. 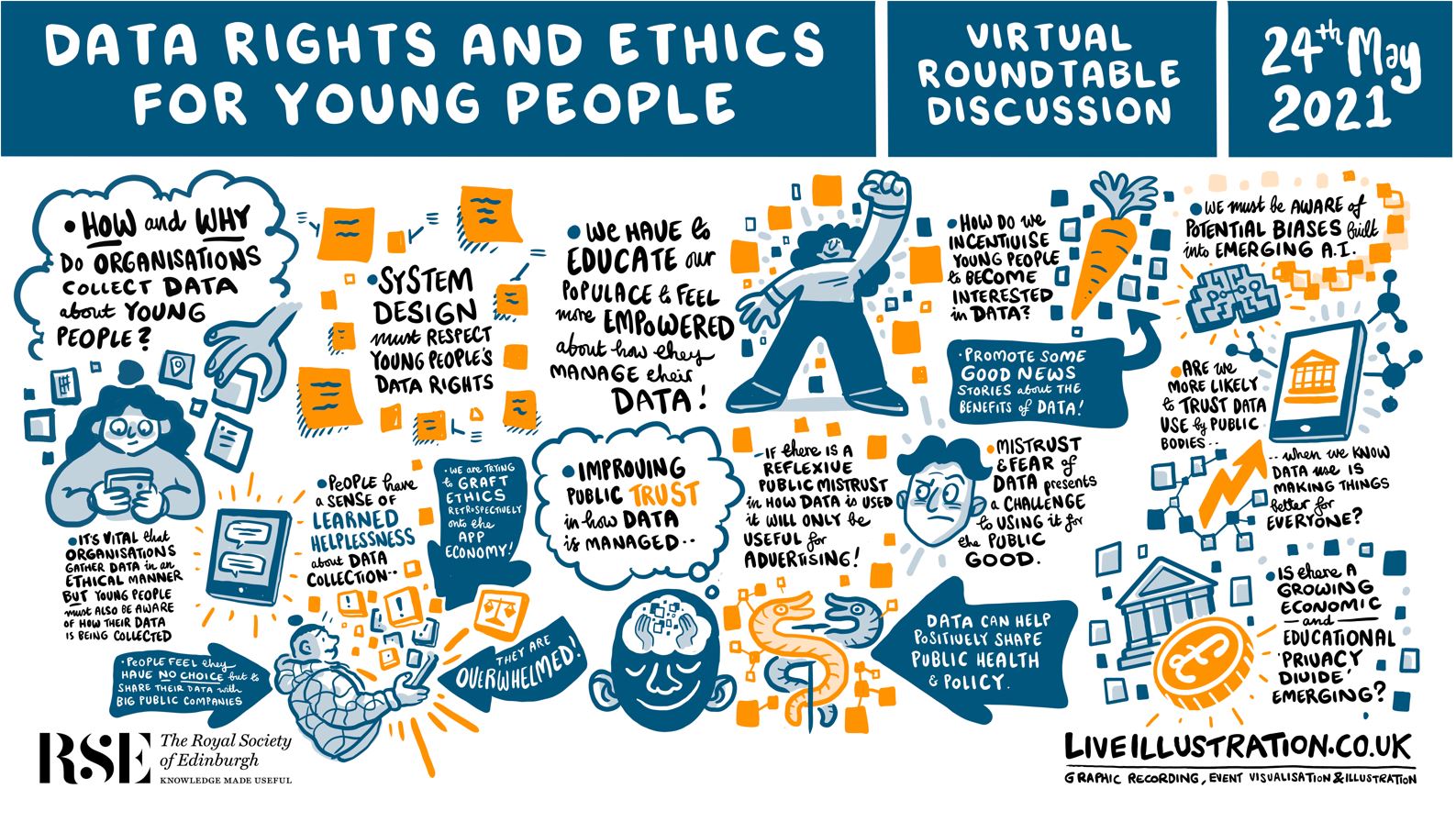 What does ‘resilience’ mean to young people?

'I got a sense of their resilience and optimism that we will get through this – but also the feeling that we need to learn lessons moving forward from Covid.'

To ‘walk the talk’: reflections on the virtual Hack

What can we learn from this process?

The challenges of advising on a pandemic

A written, spoken and visual introduction to the challenges of providing scientific advice during the Covid-19 crisis.

A video resource designed for children in Scotland, to answer some of their biggest questions about the Covid-19 vaccine.

The pandemic and the media

A written, spoken and visual introduction to the challenges of reporting.

Can Science Do Better in the Next Pandemic?

We need to train scientists and engineers to help policymakers.